Michelle Banks of Gap Inc. — the American multinational clothing and accessories retailer behind brand names Gap, Banana Republic, Old Navy, Athleta and Intermix, with more than 140,000 employees and over 3,700 company-operated and franchise stores worldwide — cares about women. This is a good thing, especially because she works predominantly with women and predominately for women. Not only do women make about 80 percent of consumer purchase decisions overall, women comprise a majority of Gap Inc.'s customers.

As the global general counsel of Gap Inc., she is one of eight women, out of eleven total executives, on the CEO's senior leadership team that leads a workforce that is about 70 percent female. As a company leader and the Board's Corporate Secretary, she also co-led an effort to add three women to Gap Inc.'s board of directors. The board now has four women out of eleven directors.

Banks shared some of her experiences and insights about advancing women and women landing positions on corporate boards of directors.

Banks has not always been surrounded by women. Her two prior in-house jobs were as legal counsel for the Golden State Warriors and American Counsel for Itochu Corporation in Japan. In both roles, she was largely working with men. "For me the workplace feels more authentic when women are equally represented," she noted.

Although she has tremendous respect for the other gender, Banks pointed out that when she arrived at Gap Inc., she had a different connection and experience with those above her. She looked to the general counsel who recruited her to the company, Anne Gust Brown, as someone who was strong, courageous and effective. Brown was also someone she personally found very likeable, and whom she could see herself wanting to emulate. "I could see being a version of her when I grew up and that thought was inspiring and uplifting," she mentioned.

The general counsel who followed Anne, Lauri Shanahan, was the same. "Lauri is the one who saw things in me I didn't yet see for myself. She guided me, gave me the next stretch assignment, and believed in me." Banks emphasized how critical it was to her career to have both of those women as mentors.

She benefitted from watching those two women general counsel, working with them, and being mentored and eventually sponsored by them. And now that she has risen to be a general counsel, she has made it her mission to pay those positive experiences forward to help others find a successful career path.

Lead by example: paying it forward to lift the entire community

Banks has made it a goal to mentor other women to help them attain the same benefits she received from her predecessors. "I encourage women to take risks, speak their minds, and not be afraid to go for it," she said. Even in a workplace like Gap Inc., where the majority of employees are women, women sometimes need that extra nudge to have confidence in their own abilities at all levels of the organization from corporate headquarters to each store team.

"When we empower women, we lift the entire community," Banks said. She believes this is true in all communities around the world, and also in the workplace. Companies can and should lead by example and capitalize on the power of diversity. As with any type of diversity, women bring a different perspective. Women can bring a different kind of intelligence, a different approach to solving problems, or a different kind of social awareness. All of these things help a company become more successful, especially a company like Gap Inc. that appreciates the majority of its customer base is women.

Banks believes there are a number of factors a company can focus on to attract and retain great women, but one issue in particular rises above the rest. "Equal pay matters. Nothing shows an employee they are valued like compensation."

Banks pointed out that Gap Inc., was the first Fortune 500 company to disclose and validate pay equality practices. "We continue to hope that we can influence others by raising the bar." The company believes, as does Banks, that equal work deserves equal pay. Failing to implement that equality leads to departures among all ranks of executives and employees.

"I think it is sometimes easier when a woman leaves her company to blame work/life balance issues. But in my experience that is not usually the case. Women want to work at a place where their time and contributions are valued. Showing that value through fair compensation speaks volumes."

Some years ago, as a result of a departure, Gap Inc., found itself with no women on its board, other than company co-founder Doris Fisher who serves as an Honorary Lifetime Director. Banks co-led the company's effort to remedy that. Consequently, Gap Inc.'s board secured three new women directors in four years. This year, they have added a fourth.

Gap Inc. sometimes utilized search firms and sometimes current directors' networks. The company defined the areas of subject matter expertise and experiences they were looking for in each case, and then cast the net in a way that would include diverse candidates.

Banks explained, "A company has to define and stay true to the expertise they are looking for to fill a particular board slot, but if you want to ensure a diverse pool of candidates, you might have to be a little flexible on how you define the other criteria. For example, if you include in the qualifications that you must have a CEO from a Fortune 100 company, your pool of candidates will be less diverse. If you broaden that reach to, for example, CEO, COO or similar at a Fortune 500 company, you will have more options without sacrificing the subject matter expertise or other priorities for the company."

Of course, subject matter expertise and relevant experiences are the most important criteria for identifying prospective board members. However, being patient and thoughtful in a board search helps companies make sure that their boards represent their customer base and the population at large.

Do lawyers make good board members?

Banks unequivocally and enthusiastically says "yes!" Although some companies have historically taken a narrower view (concluding if the company already has a lawyer, it does not need another one on its board), more companies are recognizing the value and skill set a lawyer can contribute to board responsibilities.

Through her experience as corporate secretary for Gap Inc., Banks believes two characteristics of a good board member are also common to many attorneys. "The willingness to do your due diligence on important issues and the ability to ask good, tough questions are two of the most important characteristics for a board member. Lawyers have a knack for both of these things. "She added, "general counsel also tend to be fairly financially sophisticated and have strong business acumen."

Although legal knowledge comprises a relatively small subset of subject matter expertise a board may look for, there are growing legal related areas that are important for boards, including corporate governance, regulatory and corporate compliance, risk management, and data privacy and security. "As we increasingly see new laws and regulations imposed on companies and boards, we will likely see a growing demand for lawyers to serve on corporate boards," Banks opined.

Joining a corporate board is a journey worth contemplating, especially for women

Banks has decided to build upon her current role with Gap Inc.'s board, and further follow in the footsteps of her predecessors, by embarking on a journey to land her own position on a corporate board someday. "I've learned a lot from my experiences with Gap Inc.'s board and I have seen my mentors take the professional step of joining corporate boards, so I recently decided I was ready for that potential step in my career as well. Lauri, who currently serves on private and public company boards, continues to serve as a role model and trusted advisor for me."

Banks noted, however, that patience is key for this process, as it is not unusual for it to take three to five years to land a first corporate board seat. "I've considered my skill set and areas of interest and have defined potential industries that may be a good fit. But the process takes time. I participated in a great program this summer, the DirectWomen Board Institute, which includes an educational component as well as connections with board search firms. But at the end of the day, it requires the right connection with the right board vacancy."

Banks highlighted the importance of a strong network. "As more women attorneys join boards of directors that will only improve the opportunities for other women attorneys." With Banks' skill set, experience, and passion, there is little doubt she will be a powerful addition to a board. And fortunately for others, there is also little doubt she will continue to mentor and support others in this same achievement.

Off the Sidelines: Raise Your Voice, Change the World
Senator Kirsten Gillibrand

Lean In: Women, Work and the Will to Lead
Sheryl Sandberg

Learning to Lead: What Really Works for Women in Law
Gindi Eckel Vincent and Mary B. Cranston 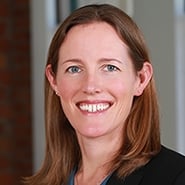